Have you ever sat in a cafe sipping your favourite arabica blend while marvelling at the gorgeous bentwood chairs surrounding you? Swoon-worthy curves, light yet durable frames, and comfortable woven cane seats epitomise the design of the humble bentwood chair.

But who came up with this simple yet ingenious idea of a chair? Michael Thonet. A visionary, furniture designer, and industrialist, Thonet is the father of bentwood furniture that has become so sought-after today. Read on to discover more about his life, his work, the history of bentwood chairs, and the Thonet brand today. 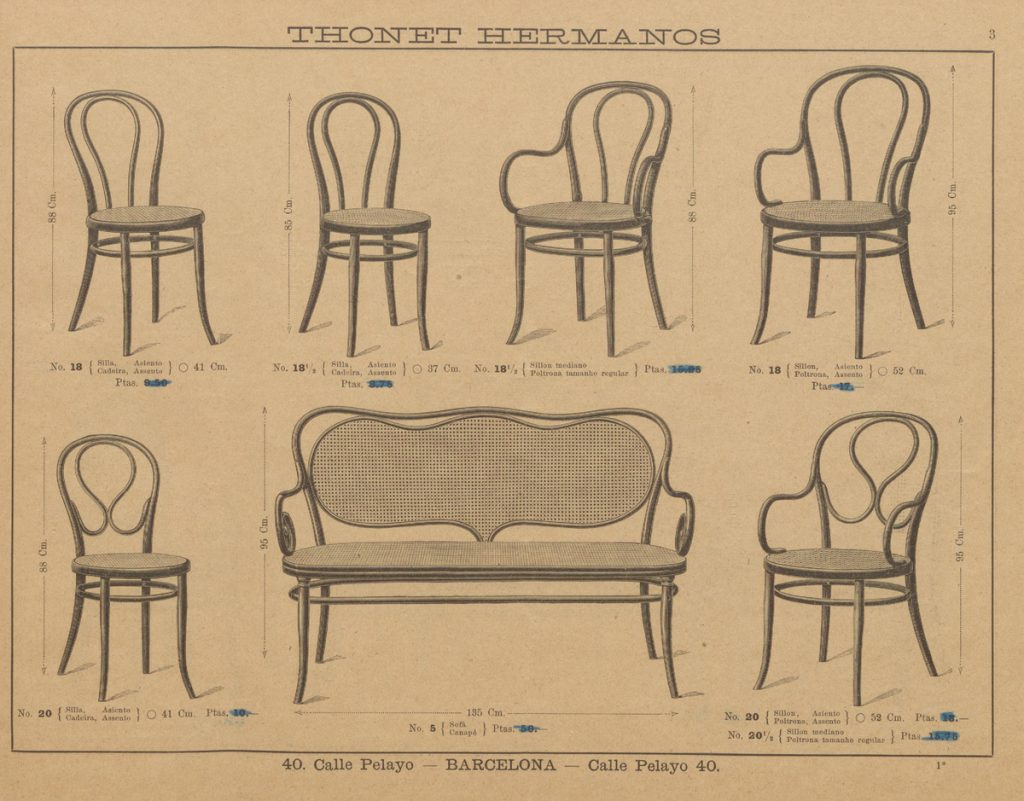 What was Michael Thonet famous for?

In 1796, Michael Thonet was born into a furniture-making family. He spent his formative years in Boppard, a beautiful picture-postcard town nestled in the Rhine Gorge in Germany. By the age of 23, he’d completed a cabinetmaking apprenticeship and had already taken over his father’s workshop.

Not content with making cabinetry and chairs the traditional way, Thonet harnessed the industrial spirit of the era and began to experiment with bentwood techniques. He would spend hours manipulating wood to create unique and interesting shapes, unlike anything else seen in furniture design.

His first foray into curvier elements involved boiling veneer strips in glue before sticking them onto moulded plywood. This experimentation led to the invention of the ‘twisted loop leg’. The playful addition of gravity-defying curves to more traditional chair designs was revolutionary and a significant turning point in Thonet’s career.

Prince Klemens von Metternich – the Austrian foreign minister – saw Thonet’s designs at a presentation to the Koblenz trade association in 1841 and made a plea to Thonet to visit his castle in Vienna to show his work to the Austrian emperor. In 1843, he set off for Austria never to return to his birthplace.

The history of Thonet’s bentwood furniture

Michael Thonet (pronounced Toe-net) thrived in Vienna. His work was respected and he had the freedom to experiment further with bentwood techniques, steam, and industrial processes. A timeline of Thonet’s bentwood furniture developments can be seen below.

1830s: Michael Thonet begins to use glue and heat to bend wood into curved shapes. These formed the backs, armrests, and legs of Thonet’s chairs. Organic, lightweight, and fluid chairs were in contrast to the heavy, chunky pieces of the era. High society favoured this aesthetic and his designs grew in popularity.

1841: Thonet met with Austrian royalty and presented his designs to the Imperial Family.

1849: Thonet’s bentwood techniques were granted a patent, meaning cabinetmakers were not legally allowed to replicate his designs. This patent allowed him to, “bend any type of wood, even the most brittle, into any shape and curve, using chemical-mechanical means.”

1851: Thonet showed a collection of bentwood dining chairs at the Great Exhibition in Crystal Palace, England. This boosted his reputation overseas and he was awarded a bronze medal for his innovation alongside more orders for his furniture.

1856: A eureka moment for Thonet! No longer did he need glue to create his bentwood pieces. Instead, he was able to use hot steam to make long cylinders of beechwood more malleable. He was able to ramp up the industrial process, open factories, and accelerate production.

From the early 1900s up until the present day, Thonet, the man and the brand, have created iconic chairs using the bentwood technique that captures the zeitgeist of every decade. The designs remain timeless, shifting from bent beechwood to manipulated tubular steel and back again with ease.

Fitting effortlessly into the modern home, Thonet chairs from the 19th century up until the present day are more sought-after than ever.

What is a Thonet bentwood chair?

A Thonet bentwood chair is made by bending beechwood (or another hardwood) into a variety of shapes using hot steam. These rods of wood are then pieced together to create a chair. Thonet cared about both form and function when he designed each chair that carries his name.

While there are too many Thonet chairs to list every example ever made, take a look at some of our favourites here at Vinterior.

The late 1850s saw the emergence of the first commercially successful bentwood chair. With its simple lightweight design, double high-loop back and gently curved legs, it’s easy to see why Viennese coffee houses were eager to sit their customers on the no. 14 chair.

Designed by the Austrian architect Josef Hoffman in 1905, this boxy chair unashamedly shows off its bentwood credentials. Perfect circles highlight the hollow sides above a symmetrical horseshoe frame. Finished in a rich earthy brown hue, this chair was unlike any other in the early 1900s. Looking at it now, it’s hard to believe that the “Fledermaus” chair is over a hundred years old. Its elegance, simplicity, and style fit the contemporary aesthetic of today.

As the roaring twenties took hold, the glamour and pomp of the era were reflected in Thonet’s armchair designs. This armchair was a favourite of the famous French architect, Le Corbusier, who used it to furnish many buildings he had designed, including the Villa de la Rocca and the Pavilion l’Esprit Nouveau.

With elaborate art nouveau styling, this Thonet rocking chair graced many homes of the wealthy in 1920s Europe. Each sienna-coloured rod of bentwood was moulded with perfect precision to create a stunning rocking chair that’s the pinnacle of both beauty and comfort.

By the 1950s, the space race had ignited a new sense of optimism across the world. A futuristic chrome-fuelled trend entered the realm of furniture design. This stunning mix of bent tubular steel and black leather created a classic mid-century look that continued the trend of world-class architects, like Mies van der Rohe, working with Thonet to create pioneering chairs.

While Michael Thonet died in 1871, his design ethos and vision continues. The Thonet company is currently led by Thorsten Muck in Frankenberg, Germany. And Thonet’s family are still actively involved in the business in advisory roles.

From his father’s modest workshop in Boppard, Michael Thonet built a furniture design empire based on simplicity, bentwood styling, and innovation that always found itself one step ahead of the design curve. And today, Thonet is still producing the highest quality bentwood chairs that can be found in homes across the globe.

Why not take a look at Vinterior’s curated collection of beautiful Thonet chairs to inspire your foray into the world of bentwood furniture?

Thonet chairs for all spaces, tastes, and budgets