A Design Classic: All You Need to Know About Ercol Furniture

Luciano Randolfo Ercolani, the designer and founder of the iconic Ercol furniture brand, was born into humble beginnings but quickly rose to prominence throughout the 1900s. Designing some of Britain’s most quintessential furniture pieces, including the 1956 Loveseat, Studio Couch and Butterfly Seat, Ercol furniture is still as celebrated today as it was 70 years ago.

A complete history of Ercol

The early days of Ercol

Luciano Randolfo Ercolani, Ercol’s founder, was born in 1888 in a little country town in Italy. He moved to the East End of London with his parents some years later with the assistance of the Salvation Army. He wasn’t a natural when it came to learning English and left school early to become a messenger boy whilst continuing to play in the Salvation Army Brass Band.

He later applied to the Shoreditch Technical Institute to join a furniture design course. Harry Parker from Frederick Parker furniture (later known as Parker-Knoll) offered Lucian the chance to work with them and this was the start of Lucien’s working life in High Wycombe. Lucien also became lifelong friends with Ted Gommes, whose family were to become founders of G Plan in the 1950s. He worked with them until he set up his own company in 1920.

Lucien established his furniture factory with the financial help of some local businessmen. It was first called Furniture Industries. In 1932 a local chair making business known as Skulls fell into financial difficulties and Lucien Ercolani took this over, which enabled him to expand his business. Even today, Ercol’s chair making section is known as Skulls. 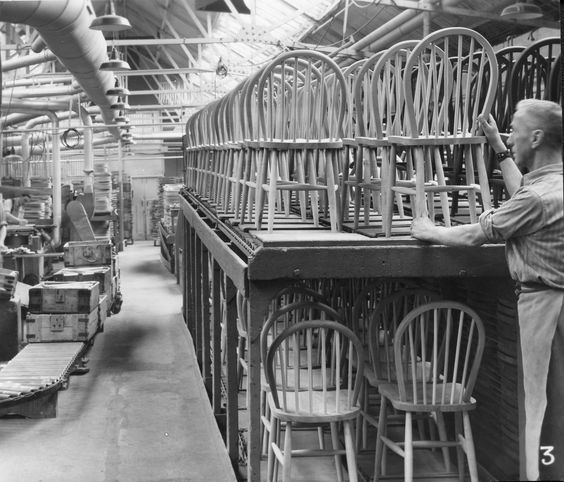 Ercol during the second world war

During the Second World War, the Ercol factory worked for the government making 25,000 tent pegs per day as well as munition boxes and other supplies. Both of Lucien’s sons Lucien B and Barry were prominent members of the RAF and Lucien B was shot down when returning from a raid in the English Channel. He managed to survive and was recognised for his service in the war.

In 1944 Lucien Ercolini accepted an offer from the Board of Trade to produce 100,000 low-cost chairs. It took him 12 months to design and build machines to produce chairs quickly at a very low cost – their cost was 10 shillings and sixpence, roughly $2.55 at the time, for each chair. Lucien Ercolano realised that he could be a part of post-war manufacturing. A month after the war ended, Britain Can Make it Festival was announced to be held at the V&A in London. He saw this as an opportunity to launch Ercol’s brand new range ‘The Windsor Collection’ – something that we still associate with Ercol furniture today.

The birth of mid-century modern Ercol

The new post-war sensibility saw the birth of the iconic mid-century modern style, which favoured furniture with simple, functional designs and easy, clean lines. During these post-war years, especially the 1950s, Ercol released some of its most iconic pieces that we still know and love today.

The Loveseat and the Studio Couch were both released in 1956 and were instant industry favourites. The Butterfly Chair and Stacking Chair, which are both still easily recognisable were produced in the thousands in the 1950s and 60s and are still part of the Ercol Originals collection today. 1957 also saw the release of the Evergreen range, a still much-coveted collection.

Later down the line, the 1980s saw the release of Ercol’s Jubilee Range, a new soft furnishing collection with characteristic bent beech frames.

After being one of the founding members of the Furniture Makers Guild in 1951, Lucian R Ercolani was made Master of the Guild in 1957 which became a city livery guild in 1963. Over the next four decades, his two sons and granddaughter have become subsequent Masters of the Guild and liverymen.

In June 1964, Lucian R Ercolani was awarded an OBE for services to UK design and manufacturing. After 82 years in the old factory in High Wycombe, in 2002 Ercol moved into a purpose-built 16,000 square metre factory on the outskirts of Princes Risborough, Buckinghamshire. Designed by Horden Cherry Lee the building has won several awards for its architectural design and environmental features.

In 2009, the V&A Museum in London commissioned Ercol to work with Italian Designer Martino Camper to make an installation of 120 Ercol Stacking Chairs for display at the London Design Festival—highlighting Ercol’s lasting significance and contributions to the furniture design space.

Check out our Vintage Ercol selection on Vinterior

Where is Ercol furniture made today?

Today, Ercol furniture is made in the Princes Risborough factory in Buckinghamshire. All of Ercol’s new ranges are designed and developed by teams of in-house designers.

How important is Ercol today for British furniture manufacture?

Ercol’s iconic designs are still some of the best British manufactured furniture products on the market. A designer that values exceptional attention to detail, Ercol still sets the tone for Great British manufacturing, with many newer brands and designers taking inspiration from its enduring designs.

Why is Ercol so popular?

Ercol’s designs remain popular because of their focus on simple, functionality and clean, timeless designs. Their furniture is of exceptional quality and in today’s market of mass-produced furniture, it stands out as a brand that offers durable quality, built to last a lifetime.

Indeed. Pieces from the Windsor range are generally the most popular and the most valuable vintage Ercol pieces. Ercol pieces are valuable because of their prestige, but also because they are excellent quality pieces of furniture, built to last. His modern designs are more affordable, but again always cross-check second-hand sale prices with those on the official Ercol website.

Ready to invest in an Ercol piece? Read our latest article: ‘‘How to identify original Ercol pieces‘ on our Stories or shop the curated collection below.

More than 300 curated products to choose from

3 thoughts on “A Design Classic: All You Need to Know About Ercol Furniture”

Your refrigerator could never! 🧊 Spotted: MCM

GET THE LOOK. Your dining room doesn’t get more