Maximalist Scandinavians… is there really such a thing? Reader, you better be-leaf it.

A minimalist approach to furniture design has long been popularised by the much celebrated mid century modern aesthetic. If the words ‘home decor’ and ‘Scandinavia’ are used in the same sentence, you could be forgiven for conjuring up an image full of clean sweeping contours and calming natural tones. Undeniably, the 20th century put Scandinavia on the map as a mecca of visionary design in the field of furniture and interiors.

However, this hasn’t always been the case. The wonderful watercolours of celebrated Swedish painter Carl Larsson offer a vivid insight into the 19th century Scandinavian adoration of colour and print within the home. This painting below details the Larsson children, all dressed up at 5 in the morning to celebrate the name day of the family’s maid Emma. The ceiling is hung with a cloth covered in red stripes and embroidered birds. This was designed by Larsson’s wife, Karin, who practised as a painter and textile designer. Her characterful home interiors are lovingly chronicled by Larsson in his watercolours. The red tassels in the maids’ rooms were inspired by traditional Swedish costumes, a reflection of the folk references Karin wove throughout the home. 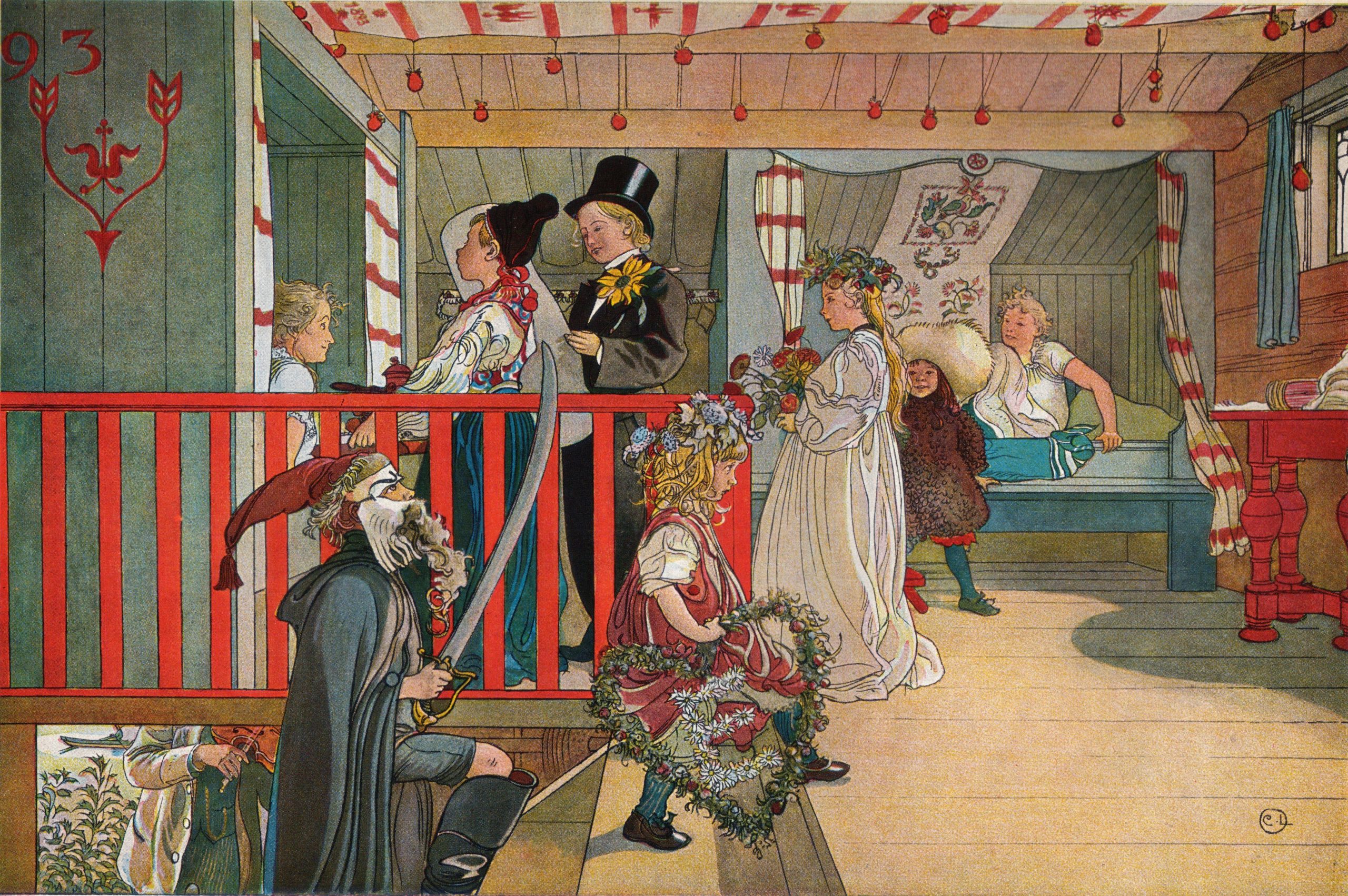 A Day of Celebration by Carl Larsson Source: wikiart.org

The Larsson’s beloved family home, Lilla Hyttnäs, became famous as a leading example of creative Swedish design. It brims over to this day with colour and original folk motifs inspired by the natural world. The British print designer William Morris greatly inspired the artistic Larssons, calling for a return to the simplicity of artisanal design and elevated natural beauty. Folk art-inflected flowers and plants are seen throughout the home of the Larssons, along with classic patterns like pinstripes and gingham. Characterised by familiarity and comfort, Lilla Hyttnäs was a forerunner of the Scandinavian value that homes are, above all, to be lived in. But, why not make them beautiful along the way? 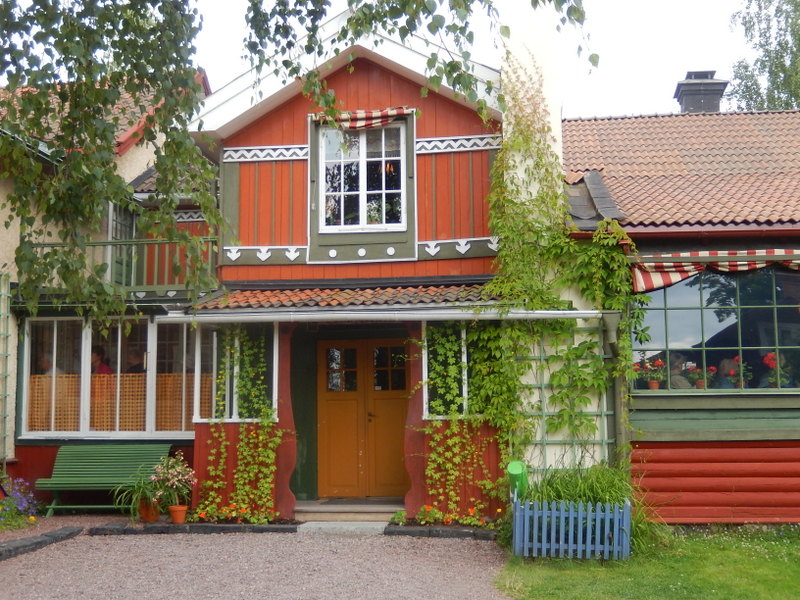 An abundance of print and pattern

The Larssons were not the only ones to colour their homes with folk art. Antiques from across Scandianavia – and Eastern Europe – are adorned with intricate hand-painted motifs detailing the natural world. Scandinavians famously value a close connection with nature. This trait is certainly evident across the beautifully decorated facades of many folk benches, wardrobes and chairs. Birds, fruit, foliage and flowers are depicted in colourful hues and serve to bring a touch of the revered outdoors into the home.

Current day trends have also seen a rise in the popularity of the folk aesthetic. Leading bohemian brands like Anthropologie are diving headfirst into bright florals and patterns. As a result, we are seeing more people toting decorative folk prints across their homes, clothes and accessories. A rejection of clean lines and minimalism, folk is for the non-conformist among us. It’s an opportunity to be playful, to delight in colour and natural beauty. Below are some stunning examples of folk antique design at its very best, an exuberant expression of the joy found in colour, pattern and the natural world. From Sweden to Transylvania, revel in this selection of hand-painted folk furniture and beware of catching folk fever.

The history of the Dala horse

The Dala horse is a world-recognised symbol of the Dalarna region of Sweden and it has a charming origin. Originally carved by men working in the forest during long, dark winter months., these simple wooden horses were brought home as toys to their children. The village of Bergkarlås is thought to be where Dala horses first originated. Neighbouring communities such as Risa, Vattnäs, and Nusnäs also became centres of horse making. These villages all homed artists who decorated furniture and clocks. Many believe that the spare scraps of wood were then used to carve Dala horses. You may notice variations in the decor and outline of the horse models. This is because the colour and motifs are common to the locality of the community in which they were made. Nusnäs Dalas, for example, have quite a flat, stout nose whereas models from the Rättvik region are of a more elegant and elongated stature.

Swedes did not paint Dala horses at all until the beginning of the 19th century. Around this time, people began to cover them in a simple coat of red or white paint. The decorative motifs on Dala horses find their roots in the Swedish tradition of adorning furniture with patterns inspired by nature. According to a local tale, a wandering artist was painting a farm when some children approached him and asked why their toy Dalas were not painted as beautifully as those in his own work. He decorated the children’s horses and it caught on, leading to the widespread celebration of painted Dalas at a national – and then international – level. 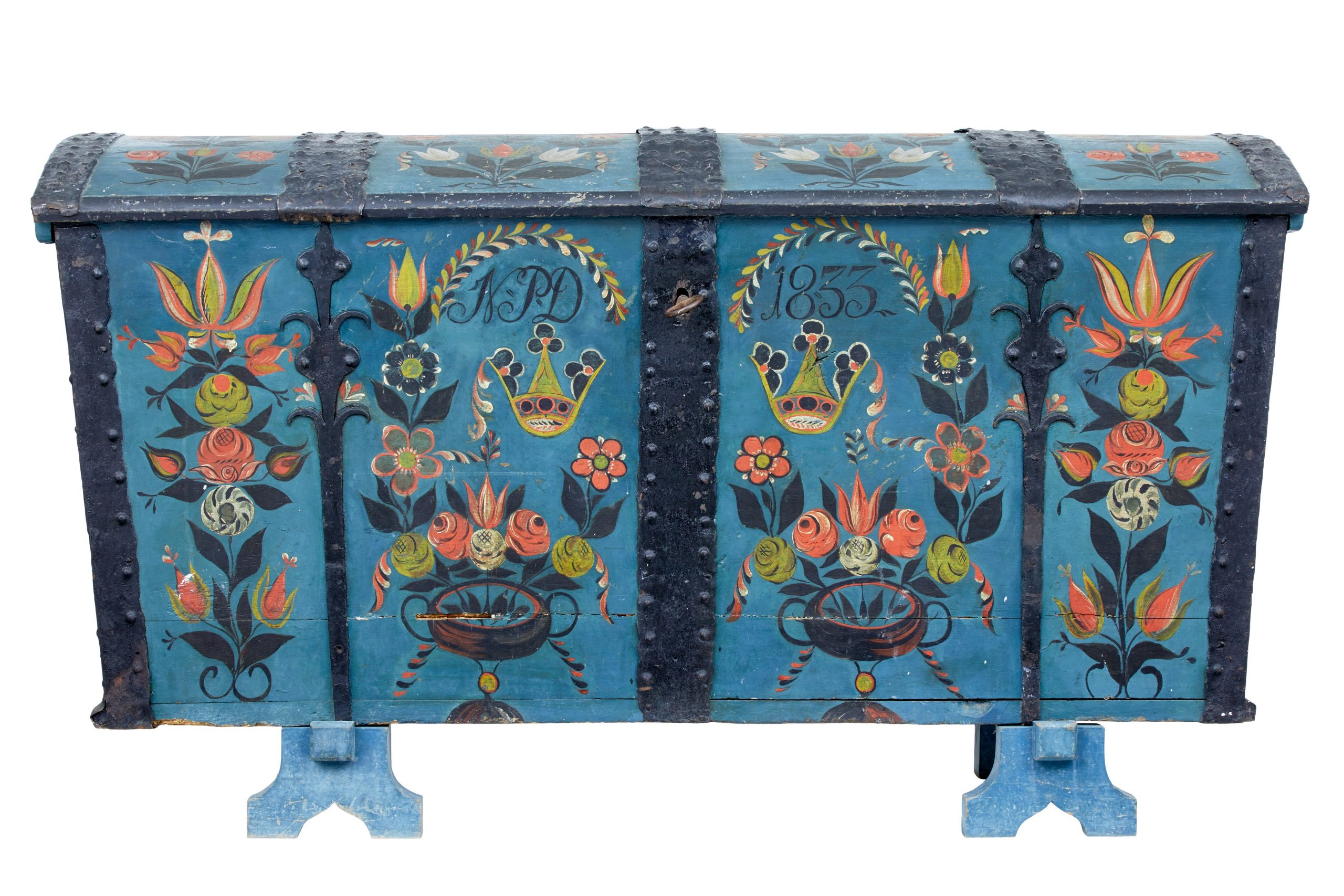 Browse a hand-picked selection of folk vintage and antiques here.

Which iconic piece of vintage furniture history wo

One of our favourite pieces available in Vinterior

Managed to find a vintage gem in our January sale?

The sleek and simple design of a Danish modern tea

A wooly take on the Womb Armchair and Ottoman by E

Welcoming in the new week with our favourite piece

Perfect scenes for a Sunday at home 📸: @themop

Grab this stunning pair of Gastone Rinaldi seats i

John Alfredo pieces to keep your homes, and yourse