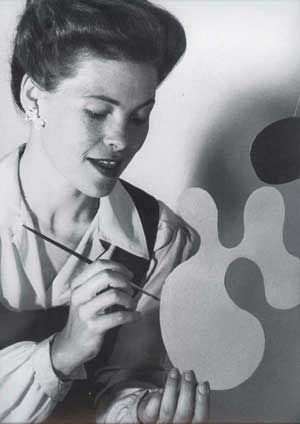 We hear a lot about the world’s most famous male furniture designers but we don’t often know the names of leading female pioneers in 20th century furniture design. Today we are placing the spotlight on four highly celebrated designers who contributed influential designs which are still going strong in the 21st century. All brilliant in their own ways, read on to meet Eileen Gray, Charlotte Perriand, Florence Knoll and Ray Eames.

Irish artist and designer Eileen Gray was born into a creative family; her father was a Scottish landscape painter who encouraged her creative endeavours. Despite a turbulent childhood which saw her father up sticks to Europe to paint, she managed to win a place at the prestigious Slade School of Art in London. The bohemian circles she moved in as a student introduced her to many creative disciplines from painting to architecture. A close friend of Le Corbusier, one of Gray’s most famous designs is the E-1207 modernist villa in south-eastern France. Apparently jealous of her entreprise, Le Corbusier painted murals over her walls, something Gray deemed as vandalism. Today she remains a highly celebrated Irish furniture designer and architect.

Have a wander through Eileen’s designs here.

French designer Charlotte Perriand was a leading furniture designer under Le Corbusier. Trained as a seamstress, her move to design was fuelled by a belief that interacting with better design leads to a healthier society. Perriand famously built a bar – ‘Le Bar Sous le Toit’ (Bar Under the Roof) – in her own room made out of aluminium, glass and chrome. It caused a press sensation and put Perriand on the radar of the design community. When she applied to work in Le Corbusier’s studio, she was famously rejected by him with the reply, ‘We don’t embroider cushions here.’ A few months later, Le Corbusier rocked up to her show at the Salon d’Automne and thus Perriand was swiftly hired to work for his studio! One of the most famous pieces she designed for Le Corbusier is the chaise lounge, seen above.

Designer Florence Knoll had a long lasting influence on postwar interior and furniture design in the USA. She studied under the Bauhaus leader Mies Van Der Rohe and upheld a holistic approach to design, believing that all aspects must come together to have a real impact on those working or living within the environment. She is credited with having developed the modernist corporate look and some of her most famous work can still be found in the interior design – including furniture – of New York’s CBS building, among others. She once corrected a member of the press who reduced her role to that of an ‘interior decorator’, explaining that the only place she decorated was her own home.

Californian artist and designer Ray Eames is known for building the enormously influential design powerhouse Charles & Ray Eames alongside her husband. She had a really fun approach to design, experimenting with vibrant colour palettes and playful fluid shapes. Together they made groundbreaking contributions across an array of design fields including furniture design, architecture and industrial design. Charles himself was quoted as having claimed that, ‘Anything I can do, Ray can do better!’.

We hope you enjoyed this brief introduction to just four of the most influential female designers in recent design history. Keep an eye out for their iconic designs – and influence on other designers – in the Vinterior collection!

Vintage style: how to create a wonderfully eclectic dining room